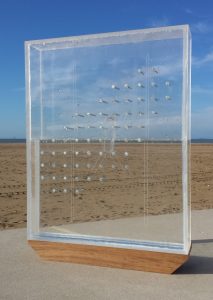 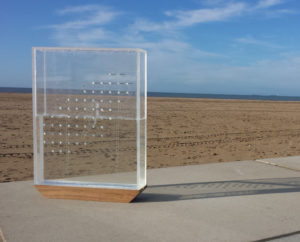 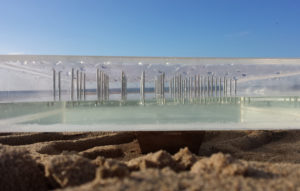 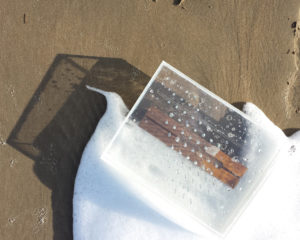 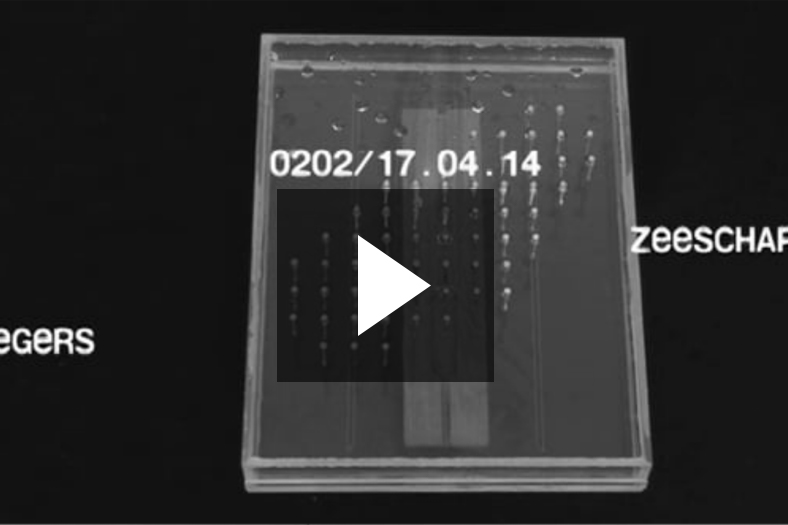 The last thirty years, the Dutch politics failed to solve the spatial issues related to windturbines. Twelve years ago the problem was moved to the sea. Out of sight, as far as possible from the coast. By this act, the last true sense of freedom in this filling up country is destroyed. An experience, that has formed generations of Dutch families for centuries. The degradation of this archetype (the sea), the last Dutch sublime experience, is spurred by the increasing need of sustainable energy and the increase of resistance towards windturbines on land.

The problematique of the Dutch land- and seascape is depicted in the manuscript in two positions: standing up and lying down.
Standing up, the manuscript shows a nail bed towards the Dutch politics and society. The ones that extend the windfarms, as a new form of urban sprawl on a national scale, outside the by landscape-given-borders. This is shown in a transparent box half filled with sea water. The glass is half empty.
Lying down, the manuscript shows the windturbines in sea, in the pattern of the offshore windfarm near IJmuiden. Looking through the box, the rusting windturbines are shown, rising out of the water with the horizon in the background. As the spikes rust, it will highlight the pollution of the sea. From above the wooden base accentuates the drowning society in the destruction of an irreplaceable experience, deeply rooted in the Dutch identity.

The box contains seawater, consists of perspex and has a teak-wooden foot. Moving and shaking the box awakens the sea, due to the specific characteristics of seawater.