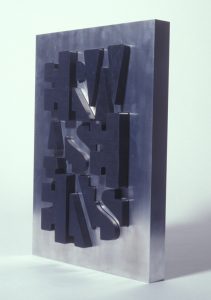 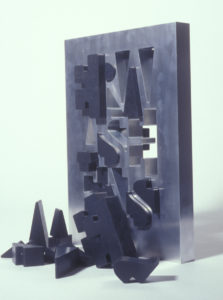 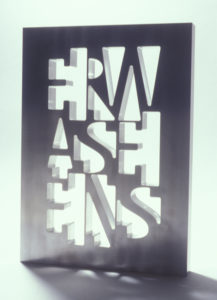 How happy I was when I first learned to read! At breakfast I would read all the texts on the peanut butter jar and on the packet of chocolate sprinkles, and sitting on the back seat of the car I would read out loud all the letters we came across. Now, millions of letters further, for me the alphabet is still the most splendid invention.
Letters and playing-with-letters is my obsession. Architecture and decoration on everyday objects are a source of inspiration for my visual idiom, witness the letterform CORDOBA. The decorative beauty of the ‘unreadable’ Arabic texts on the walls of Moorish architecture in Andalusia in Southern Spain served as my inspiration. I wanted to achieve a similar formal idiom with our angular roman: an ostensibly unreadable decoration. The inner form of the capitals of a traditional italic, Egyptienne, was the departure point for developing the letterform CORDOBA, which due to minimal features is nevertheless recognizable as a letter. A manuscript is a book is a story… the text ERWASEENS (THEREWASONCE) is universal and invites you to make up your own story. The rubber is suggestive of and refers to stamping/printing and invites you to take hold of it: to open the story… The individual letterforms invite you to create new letter combinations, new letter ‘structures’, another story…: the spatial manuscript THEREWASONCE is like a bookcase full of stories. By using minimal interspacing and spacing (white space between lines and letters) with CORDOBA, as an ostensibly unreadable decoration, I work with the concept of space in terms of graphic designing. With CORDOBA, the graphic concept of space is taken even further: CORDOBA is based on the minimal form that is still recognizable as a letter.
-JH