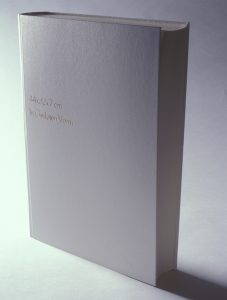 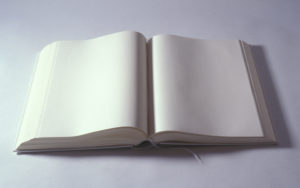 The idea for this manuscript came to me spontaneously while putting the finishing touches to the graphic design for the Vedute cahier ’00:00 Time & Duality’. In spite of, or thanks to, the pressure that completing the cahier entailed, I had an acute desire to represent the merits of the project and the given design brief in a conceptual form. As a graphic designer, in addition to subordinating the design to the story that is being told in a publication, I also approach a book as an object. It should be apparent from that thing the reader has purchased and is now holding how I as the designer have translated the content of the story in the form in which it is presented. My manuscript is a tangible experience of space, determined by universal choices when designing that space.
This manuscript represents the starting point for a design. It is an idée fixe, the object as Dick Bruna might depict it in ‘Miffy is reading a book’. A book design is strictly speaking a combination of its own parameters: a harmonious assemblage of variables such as format, thickness, the number of pages, the number of impressions, the amount of text, the budget, the number of speakers and the possibilities as regards industrial fabrication. I contracted out this manuscript’s fabrication as a matter of course. It demanded a painstaking approach on the part of the bookbinder in order to achieve precisely the right Vedute format: the combination of the enormous rounding of the spine and thus of the book block, the size of the cover and the desired thickness of precisely 7 cm was achieved with some difficulty. That the book, moreover, was to remain blank, and that I opted for gold lettering on white cloth, caused frowns. My gratitude for the end result thus required some explanation.

In order to allow the narrative aspect to come to the fore, this blank book has been given the stylistic features of a classic novel. The featherweight paper chosen presupposes a textual content, the bookmark functions as a metaphor for the linear treatment of the content. On the cover there is no more nor less than the format ’44 x 32 x 7 cm in closed form’, the only restriction placed on the designer of a manuscript. This text is typographed on the object like a pleonasm. It has been applied in gilt on a white cover; it thus flirts with and at the same distances itself from the tenets of the traditional métier. (This is comparable to the choice of a gold-coloured solid area on the cover of the Vedute cahier. The liberal yet affordable use of this pigment in present-day offset printing contrasts with the decorative – manually applied – gold leaf of the distant past, which was necessarily used more sparingly.)
-SM