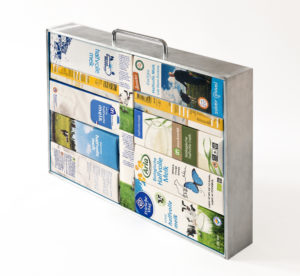 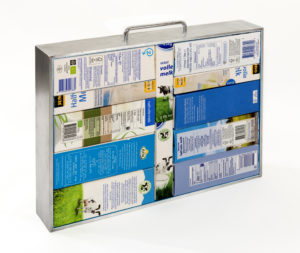 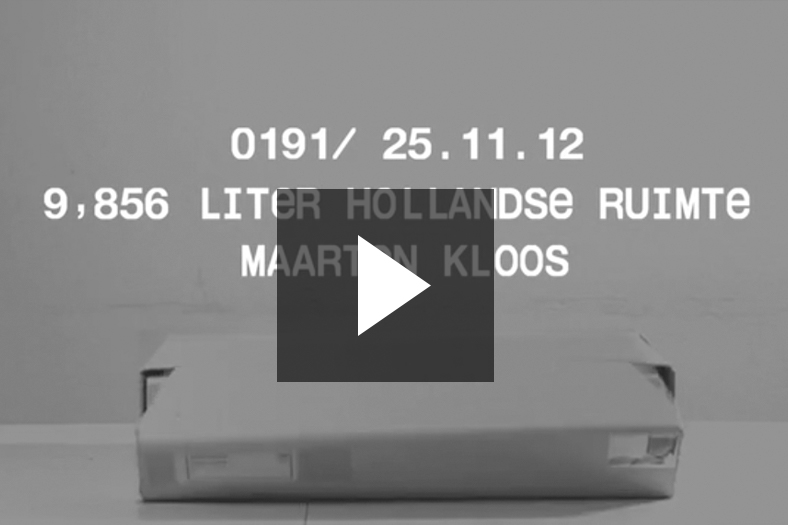 The idea for ‘9.856 litres of Dutch space’, presented in the autumn of 2012, dates from 2011 when, during the foundation’s fourth anniversary celebration, the relationship between Vedute and the ‘Statenbijbel’, the first Dutch authorized translation of the Bible, was once again placed on the agenda. On that occasion, I harked back to what I had written in the introduction to the very first Vedute-cahier: the space within a manuscript measuring 44 x 32 x 7 cm is no more and no less than 9.856 litres, ‘almost equivalent to ten cartons of milk’.

The manuscript consists of 9 one litre milk cartons plus a modified volume of a little more than 1.8 litres. Two stacks of 4 horizontal cartons are so grouped that the remaining 1.8 litres form a cross, in reference to the Statenbijbel. As a result, first and foremost, some 9.8 litres of Dutch space is conveniently packaged and colourfully presented. We see a blue sky, green grass, a field full of cows, birds and butterflies. A life that is fresh and creamy, a world that is honest, clean, pure and organic, above all: imbued with energy. The farmer surveys the space of the man-made Dutch landscape, enlivened by a fragment of Delft blue and graphically designed in accordance with today’s commercial fashion. Strictly framed according to Vedute’s directions, there is also – running right through everything – the emotionally charged sign of the Cross, which for centuries has so informed Dutch culture. I have taken one liberty: the Bible is vertical, my manuscript is horizontal, because faith may be upright but Dutch space is flat.

This also creates space for an inexhaustible series of stories. Each carton of milk that leaves the shop is one tenth of a spatial manuscript; everyone who throws away an empty carton throws one tenth of a manuscript in the rubbish bin. Every ten people who buy a carton of milk together form a manuscript. Thus, countless temporary virtual networks are formed every day, with the shop where the carton is purchased as the source. At every table where prayers are said before consuming The Carton, the sense that this is taking place in a great togetherness is justified.