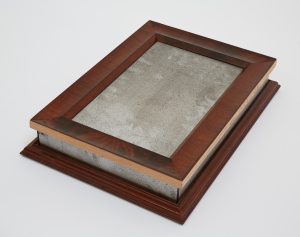 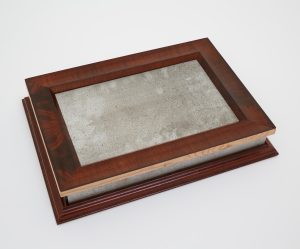 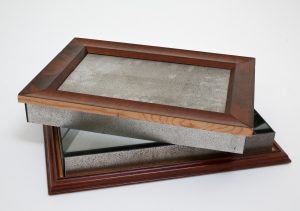 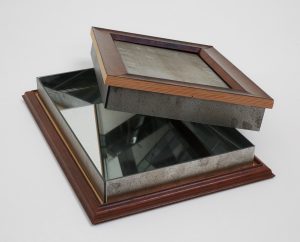 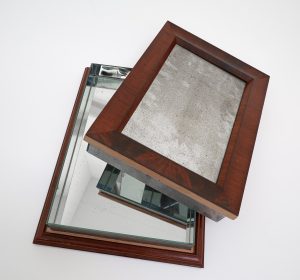 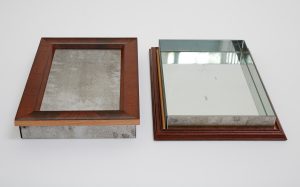 During the early years of photography, photographs were also referred to as ‘mirrors blessed with a memory’. In Exhausted Mirror, I tell a fictional story about an antique mirror that is also blessed with a memory, in which it remembers and stores all the images of every moment it has experienced over the past turbulent one hundred and fifty years. As a three-dimensional manuscript in the form of a box measuring 44 x 32 x 7 cm, the mirror has a moment of rest – no longer does it have to continuously absorb the world around it, and maybe it can finally release its impressions.

My artistic method is rooted in the realization that space cannot exist without a historical and topical reference framework, and without spectators who relate to this space. A mirror is not a neutral object: as a virtual space, it is both of current and historical significance. Its reflective nature repeatedly invites observers to relate to both the mirror and its historical context(s) from the viewpoint of their own personal context.

The mirror that forms the basis for my design dates back to the Biedermeier period, and since its creation has witnessed the emergence of citizenship, various imperialism(s) and two world wars. It was later owned by a fashion model from the GDR who famously featured on the covers of East German magazines. With the female body and the idea of the transience of beauty as a reference point, an artistic reference to the iconography of vanitas requires but a short leap of the imagination. At the same time, the mirror has become part of the narrative of the Cold War, and as such reveals new meaning in the present day, in which that same field of conflict appears to have acquired a new contemporary relevance.