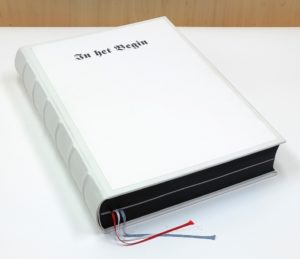 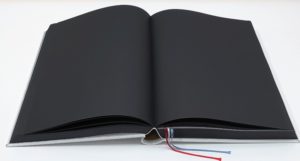 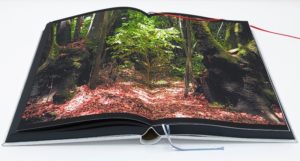 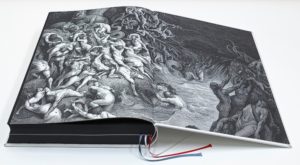 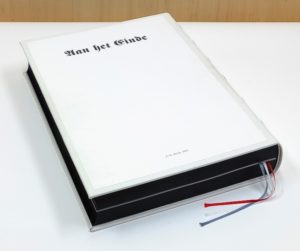 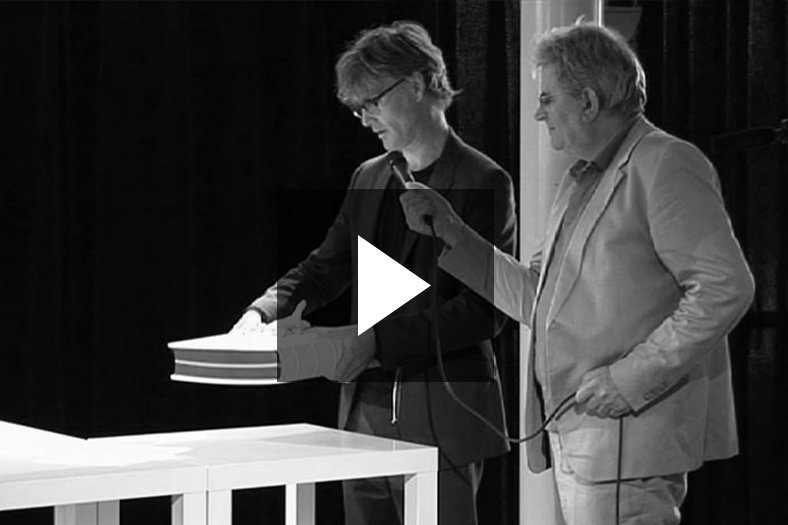 My Melancholic Bible summarizes the time between the beginning of the world and the final return to ultimate darkness.

This book is a symbolic Bible. It stems directly from my work and embodies a pantheistic vision. The landscape forms the real context of the Melancholic Bible. Somewhere in the middle of the vast (sublime) darkness, three pinpricks of light, like a landscape, can be descried. The Arcadian moment of paradise (the warm seclusion of the forest), then the chthonic wilderness, and finally the ruins of the vanished civilization (the presence of nature in culture).

The black book-block symbolizes both the boundless darkness of the universe and the melancholic destructive side of humankind; the destruction of nature. The pristine white cover is the thin membrane of elevation and hope, and also the bearer of the two statements ‘in the beginning’ and ‘at the end’. Melancholy resides in the fact that this contrast is not in balance… The endpapers and flyleaves function as the introduction and the end, as the details of Gustave Doré’s Bible engravings show. In my view, that is the sacrifice of the forest for civilization and idolatry in the beginning and at the end,the engulfment of life by water, ultimately the most concrete fate of a large part of our Dutch nation state. In the beginning, destructionby culture. At the end, destruction by the forces of nature.

Both creative forces. In the beginning, the tree in the cloud forest, the being that is the key to bearable life, producer of air in moisture, supplier of the material, bearer of the most soothing colour. The embodiment of permanent growth and sublime beauty.
-EO