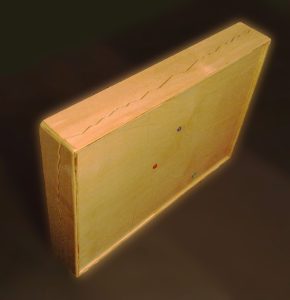 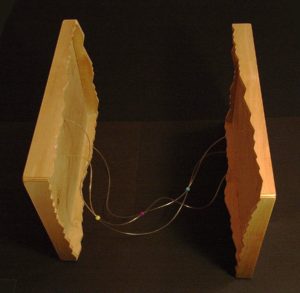 In my first year at the Gerrit Rietveld Academy, I did my utmost to distance myself from physics. With only moderate success. In a public discussion with Peter Struycken, the latter said about my work: ‘You make natural phenomena.’ That was not intended as a compliment, I suspect, but ever since I have used it as a sort of Beggars’ flag. I make natural phenomena in a universe I have constructed, where the laws resemble those that apply here, but are just that little bit different.
I shall suppress the inclination to explain here how and why I go about it. My fellow student Luit Tabak has tactfully warned me about that, saying: ‘When questioned about a work, you immediately give a lecture on it.’
So I have continued to use images and concepts from science: Meteoric Seed, Einstein’s Origami, Principle of Huygens. In the future: Pharoz, in which I want to turn the entire heavens upside down.
And now the Vedute manuscript The world according to Markov.
First the closed position. On the lids are three mathematically determined and positioned points. Around the edge a line that zigzags in accordance with the Markov process, also known as ‘drunken walk’, in which you toss a coin for left or right. That left-or-right path is executed as a groove. Firstly, the closed box is built and is then sawn into two pieces along the sides by tossing a coin: heads = right, tails = left, and so on until the curve closes and the box can be opened.
The zigzag line must be closed in order to be able to open the box, but the underlying idea is that it has been mathematically proven that the odds are that, on average, you remain stationary if you leave moving forwards or backwards to 50/50 chance. If you continue long enough, you will eventually get everywhere – although this is not very likely – but keep returning to the vicinity of your starting point.
Life is governed by Markov processes. That’s why in the open position the work shows three life lines in space and in time. These lines are also the result of a chance process, but here the steps are so small that they are no longer visible within the thickness of the threads that mark the life lines. The three life lines meet at three different points in space-time, as is the case in our lives. These points are marked by beads, which denote significant events. Were you to greatly increase the space-time scale, you would see an almost immeasurably fine web of countless encounters of this type.
Encounters between atoms, between cells, between living beings, between planets and stars and star systems.
After each encounter, the World according to Markov continues. Afterwards, you assign significance to these encounters, but behind them lies the laws of chance, which determine the course of the life lines in space and time. On opening the manuscript, the life lines unfold but a particular configuration will never occur in precisely the same way a second time if the document is then closed and opened again.
-VI