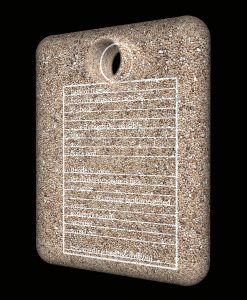 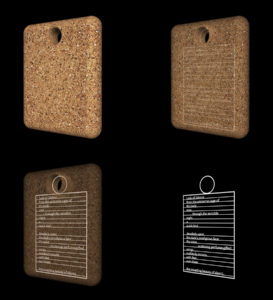 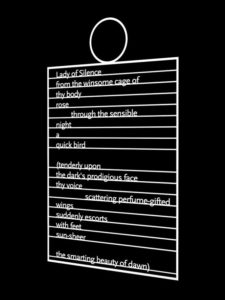 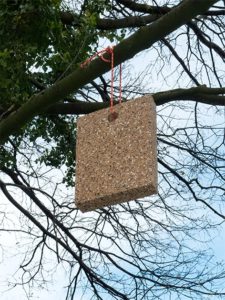 Most spatial manuscripts reveal their essence through use: they are opened, taken apart or put together or are connected to an energy source. My proposal for the Vedute foundation involves an optimal form of ‘use’. Spatial manuscript 153 is a block of birdseed measuring 44 x 32 x 7 cm, which is equipped with a stainless steel armature. The birdseeds have been carefully selected, whereby one specific species of bird served as the reference point:
the rose-ringed parakeet (Psittacula krameri), one of the most surprising migrants in Amsterdam’s bird world. During the course of a single winter season, spatial manuscript 153 will be eaten by the parakeets in Vondelpark. What remains is the stainless steel armature in which a poem by the American Edward Estlin Cummings has been incorporated. The language is gradually revealed. Spatial manuscript 153 embodies my belief that the essence of the collection of the Vedute foundation lies in the expiration of time, in a gradual transition from matter to space.
-RvT