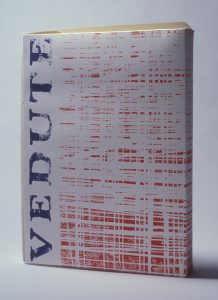 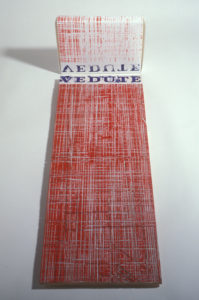 I was fascinated not only by the Vedute collection and its principles, but also by the word ‘vedute’. While searching for the meaning of this word I came across the distinction between vedute ideate and vedute essate. Vedute essate are more-or-less realistic townscapes. Vedute ideate, by contrast, are largely imaginary townscapes.
This spatial manuscript falls under the latter category; it is an imaginary abstract veduta. The play of horizontal, vertical and diagonal lines allows viewers to determine their own horizon, as a result of which new vedute repeatedly come into being. Not only can anyone fix their own vedute in the jumble of lines, it is also possible, with a little effort, to create one’s own spatial manuscript. My contribution consists of two parts: the wooden book and the prints of it, which can be folded into a spatial manuscript. This can, however, only be done a limited number of times; the woodcut is ‘depleted’ after a while. When the woodcut has lost its function and the paper manuscripts have been given away, the wooden book can rightfully become part of the Vedute collection.
-PB