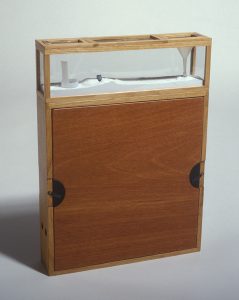 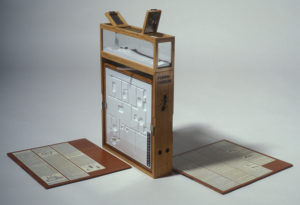 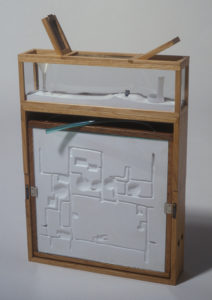 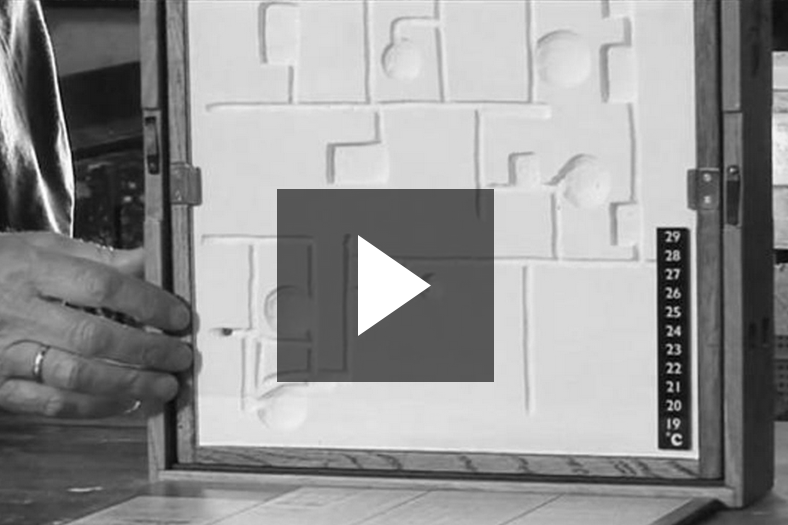 When asked to represent the concept of space, as a visualized idea, in a three-dimensional object, I am faced with a problem of choice. The concept of space is so immense that a quest for its essence would mean an endless elimination of ideas. I would in effect like to visualize the essence of those imploding flows of ideas and before you know it you are writing a book. I gave myself a formal architectural brief when fleshing out the strict programme ‘44 x 32 x 7 cm’. Not a representation of a concept, not a translation of an idea that is part of my oeuvre, not a design assignment and not a model. I have made a building with all the necessary spaces, structures, utility facilities, functions and requirements that the user needs. A building that fits and can function within the dimensions 44 x 32 x 7 cm and not a millimetre more. For this design I drew inspiration from famous ‘architects’ such as Lubbock, Wassman, Fielde, Donishorpe, Santschi, Janet and Viehmeier (although very few Vedute visitors will have heard of these designers). I have made a formicarium based on the principles of the ant expert Janet. An artificial ants’ nest in which, depending on the species, some 1,000 ants can live, work, give birth and be born, milk, trade slaves, keep cattle and wage war. The nest consists of a well-ventilated, dry and light outdoor area with a feeding site, beneath which is a dark, humid space with nesting rooms. A second area with nesting rooms functions as a spare space for expansion in case of population growth and also as a space for the population during the annual spring clean. The outdoor and the indoor area are connected. From the outdoor area, the nest section proper can be moistened by means of a funnel. The correct humidity level in the nesting space is essential for the well-being of the population. A detailed account of how to keep an ant state can be found on the inside of the nest. The design of the nesting rooms is derived from the floor plans of dwellings on Grote Houtstraat, which came to light during excavations in Haarlemmerplein in 2000.
-PvdH