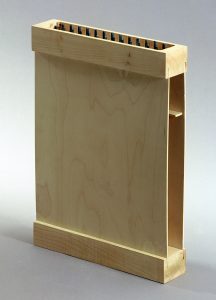 If you sneeze really loudly, the steel plate casing of the gas heater sings along with you. Now that I live in an apartment with central heating, the casing of my PC has taken over the singing. I have also found a way of making myself sneeze: if I tickle the sneeze reflex hair with a small watercolour brush, I can’t stop myself.
Sound comes into being due to tension in material. In construction, you have tensile force and supportive force. I wanted to make an object whose form (32 x 44 x 7 cm) is the result of tensile force and supportive force. The tension in that object produces sound. The people who manage the Vedute library wear white gloves in order to take the manuscripts from the shelves and show them to the public. The manuscripts are placed on the table, folded out, opened and unravelled with the utmost care. My manuscript, by contrast, should be set down on the table boldly and with force; only then does it reveal its secret. The value of the manuscript is directly proportional to the force with which it is placed on the table.
The displacement of air produces sound. The medium itself (air) then produces vibrations. I wanted to make a small object, which is tensioned. Smaller than 32 x 44 x 7 cm. If you remove the safety catch, the object expands to its final format (32 x 44 x 7 cm). The expansion causes air to be displaced and thus produces a sound.
The reverse is also possible: the original format is 32 x 44 x 7 cm. By pressing a button, the object shrinks and produces sound. This should be a slow process.
-HM