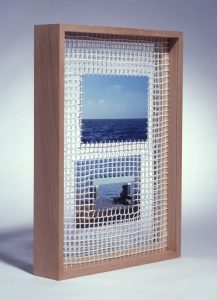 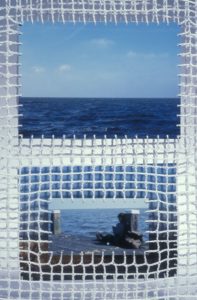 Two landscapes, immortalized in their transience.

A visit to the exhibition ‘On country roads and fields’ (1997) in the Rijksmuseum, left me feeling slightly envious. In the countryside, outdoors, painting the landscape, I liked the idea of that. However, leaving aside the fact that I lack the technical skills, the impossibility of such an undertaking soon became clear to me. It would be an anachronism. In my own art practice, I have only a crochet needle and a camera at my disposal. I would have to make do with that.

I took my yarns with me and went and sat and crocheted on a jetty on Marken. The photos I took using the self-timer have been crocheted into the work I began there. On the other side of the work is a photo of Haarlemmermeerpolder, beneath which are hands crocheting in the train. (The train is for me the obvious mode of transport for getting myself to this polder.) Haarlemmermeerpolder and Markermeer have been crocheted together back to back: the polder would not exist without its past as water. A lake does not need a polder in the same way, with the exception of Markermeer, which without the plans for impoldering would never have existed in its present form. Anyone who looks at a polder knows that, should human maintenance fail, this piece of land would revert to its former state: water. Anyone who looks at Markermeer knows that, should nature conservation fail, this piece of water would be transformed into its planned state: polder
-EP