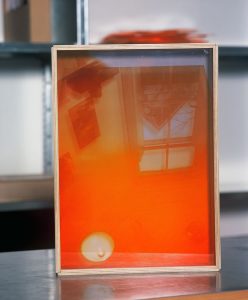 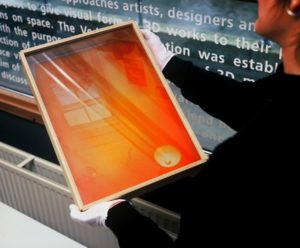 Taking a personal space, his studio, as a departure-point, he built a large box, whose proportions are those of the Dutch Authorized Version of the Bible, on top of which he placed a sheet of glass. With this he slid through his studio in order to allow an interesting moment to be reflected in the object; the object was thus used as a viewfinder, as it were. A reflection of ‘window and ceiling’ in the studio and the (empty) space of the box were photographed from above with a technical camera. This photograph, mounted as a transparency on Plexiglas, covers the wooden space of the manuscript and is only visible when this space is added. The shadow of the box gives the image its space and grey values.

In the final manuscript, several moments converge. Alongside the transparent photograph of Wilschut’s studio, seen in the perspective of a box, we see the (empty) volume of the manuscript proper and the reflection of the space in which the object is seen.
-HW