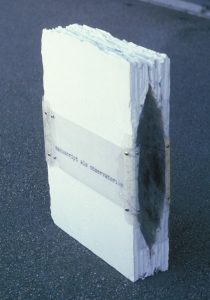 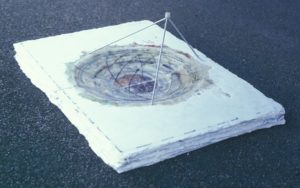 -the children’s game Amsterdam / North Holland / The Netherlands / Europe / the World/ the Universe as a sense of a larger system
-likewise, the observatory consists of maps ranging from small to large
-place and time: the axis points north-south; the deliberate positioning of the object in relation to the entire earth as an action, the pin is parallel with the earth’s axis
-the movement of a day, the movement of the earth, the earth that revolves around the sun
-the angle of light linked to time (and if you know what time it is you can see where the sun is)
-in the same way that you record the height of a child, so the blank section should be filled in with times and places
-like the observatories in Jaipur and Delhi
-a study surface -a receiver, a receptor
-the form (opened out): a satellite receiver
-the form (closed): a cross-section of our solar system
-MB