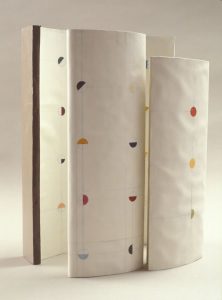 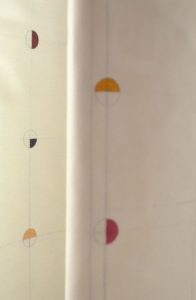 In the centre of the Indian city of Ahmedabad are two mausoleum complexes, separated from each other by a busy market street. A king lies buried in one of the mausoleums, his wife lies buried in the other. The temples are connected by a route, which intersects the market street. The idea arose for the king and queen to meet each other unobserved in the market. Having traced out the line of their meeting, I then made a division in both their forms and placed this in front of a wall the colour of the first blue of dawn. The strip of light in the form formed an intense image of their separated meeting.

The spatial manuscript as it now stands is an amalgamation of elementary architectural and painterly elements: the angle, the arabesque (executed as volumes), the grid and colour. Together they form a free space, in accordance with the essence of every environment, whose dimensions are only revealed when in use. Distance gives rise to the image.
-PF