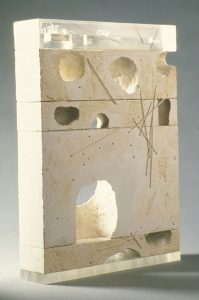 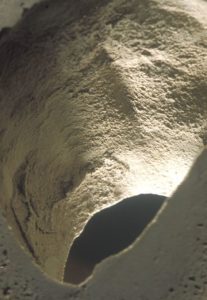 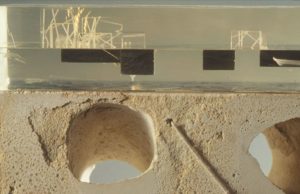 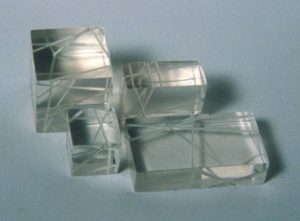 Fathoming invisible patterns is characteristic of Raoul Bunschoten’s working method. Only when you identify the city‘s experiences and patterns can you name them and map them. ‘Amsterdam object’ is a model for fathoming a number of, partially invisible, levels.

The manuscript consists of stacked layers of perspex and concrete, whose stratification, volumes and cavities are interrelated. On top are two layers of perspex, the dividing line between which denotes the horizon. Structures, which are scarcely visible, have been incorporated in the topmost layer (= sky). Below (= water), solid metal cubes have been cast in the perspex in order to indicate that most of Amsterdam lies concealed beneath the water. These two layers rest on four blocks of concrete sewn together with string, which represent the cross section of the earth’s crust. The cavities refer to the mystical primal element: the cave as a symbol of the first dwelling. The whole stands on another layer of perspex (= water) containing minuscule tubes; the foundations on which Amsterdam is built.