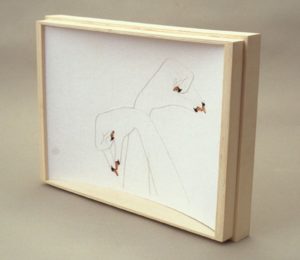 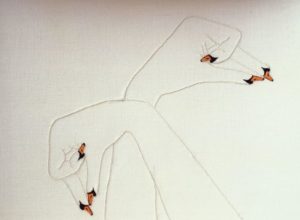 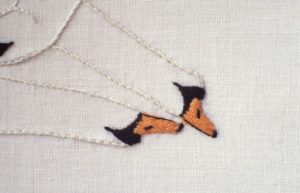 In the same way that an architectural space can be seen as the bearer of meaning, Connie Dekker has conceived the spatial manuscript as the bearer of mental space. She has chosen an old game as a metaphor: the shadow play. In a shadow play, the wall disappears and another world arises, a shadow world: that of the imagination. The swan functions as a guide.

Embroidery has become a means of giving the personal more space. I use myths and old tales less and less. Increasingly, it is becoming my story, in a comparative manner, as in the frozen ballet of the swans that I embroider. I am not concerned with translating reality into images. Rather it is about allowing the images to become reality, in the hope that a world will unfold in which things cannot be other than they are. Just as in those stories, my embroideries are not only about the result, they are also about what happens while embroidering. Like echoes of the spirit, ideas weave themselves into the canvas by means of needle and thread. And here I am powerless, because it is up to the viewer to recognize them.
-CD