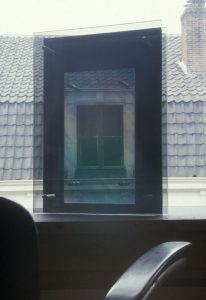 Three glass plates, the outer two of which are covered with polaroid foil, joined together by pins determine the appearance of the manuscript. The space is determined by a formal layout, the effect of which touches a different dimension. It is not the actual interior or exterior space that is addressed, but rather the unnameable area in between: a place of real value, which appeals to the imagination; space that is comparable to ‘white spaces’, the spaces between letters and words. The title of the manuscript is derived from Hitchcock’s film ‘Rear Window’ (1954), which is also about associations and psychological references.