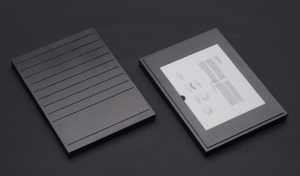 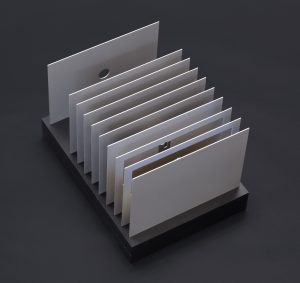 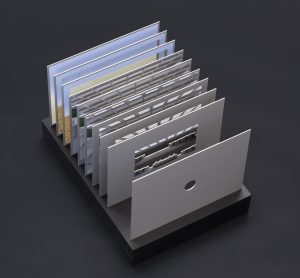 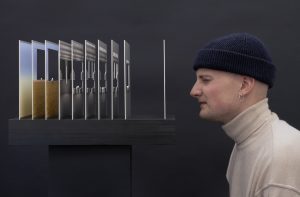 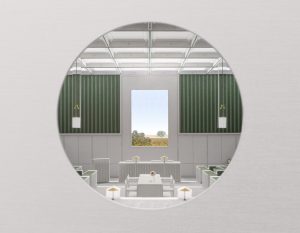 The Victorian peep-show consists of a paper viewing box made up of a linked series of cut-out prints that overlap to conjure up an imaginary scene. As the concertina-like box stretches out, a miniature world unfolds before the viewer’s eye, transporting them to a festival, a historical event, a distant land, a theatrical performance, a battlefield, a biblical scene or an international exhibition. As the numerous, vibrant scenes recede into the distance they create a wondrous illusion of depth.

Taking our cue from this intriguing phenomenon, we created a spatial diorama of overlapping windows that coalesce to produce a perspectival spectacle of the temporary chamber of the Dutch Senate – an interior our office recently designed as interim accommodation for the Senate during the comprehensive renovation of the seat of the Dutch parliament (the Binnenhof) between 2020 and 2026.

The eye in the foremost window directs the gaze along the spatial axis of the chamber with the ministers’, record keepers’ and chairman’s tables in the middle. These are flanked on either side by the senatorial benches, and on the upper level by the press and public galleries. Together they constitute a democratic arena that gives expression to the Senate’s role as a ‘Chamber of Reflection’.

Above the ministers’ table, where the portrait of King Willem II usually hangs, is a monumental opening, a collective window on the world beyond. This symbolic landscape reflects the four virtues on which the State’s authority rests: the sunflower stands for fidelity, the pomegranate for unity and the olive for peace, while the rose on the record-keeping table in the centre of the chamber represents love.