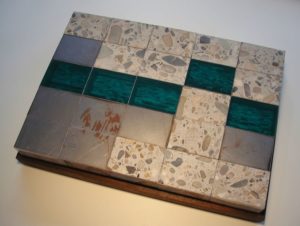 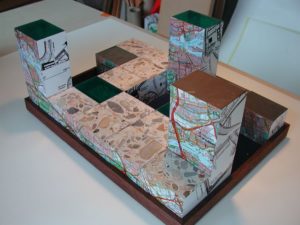 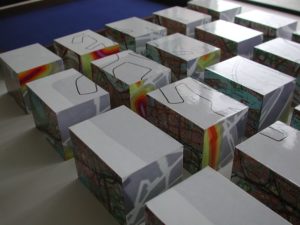 Rotterdam’s image has long been subject to extreme fluctuations; shabby port city, casualty of war, ultimate emptiness, laboratory of experimental urbanism, mainport, provincial town, birthplace of the new politics, battlefield of failing integration, centre of hipness.
Rotterdam fascinates me as an inhabitant and as an architect precisely because all of these images touch a core, but also substantiate their opposite. Elsewhere, in a different city I am always surprised by the definiteness. Other cities are imprisoned in their image. Rotterdam is not. That’s why this box of building blocks should be played with; not protected behind glass and no white gloves. I hope for greasy fingerprints, comments, graffiti and here and there a hole. For stacking and mixing, logic and illogic, quest and discovery; that way it becomes increasingly Rotterdam. City of fragments. Once shattered and continuously changing ever since.

City of stone, steel and water / DaF-architects Rotterdam, 2004
City of concrete, port of steel and Maas of glass. The concrete is gradually ousting the steel.

Topographical map / ‘Photogeometric map in stereographic projection’, Topographic service Emmen, 1997
The map of 1997 is already quite outdated. The new city bridge is on it, but entire dock areas are now covered with housing.

Historical map / ‘Old and new Rotterdam’ (1940 & 1955), Rotterdam Public Works Department, 18 May 1955
This map reveals the city’s secret. Behind the ‘extreme makeover’ of 1955 lies the city of 1940. The structural differences, as at both ends of Coolsingel, on Maasboulevard and on the edge of Kralingen are still perceptible on the street.

Contour map / adapted from ‘Rotterdam High-rise city’ (p. 62), DS + V & OBR Rotterdam, 2001
Rotterdam’s skyline is stunning and expanding. The new highrise taller than 100 metres is intended to increase the urban intensity to a literal climax in a number of places.

Mental map / DaF-architects Rotterdam, 2004
My map consists of a daily circuit by car/bicycle on which there is work, shops and frequently visited addresses. The route is excellent and I have succeeded in reducing the number of traffic lights to an absolute minimum. The thick line is quite confrontational; there’s a lot of the city I don’t usually use.

Ideal city / Storia della città. Leonardo Benevolo, Rome, 1982
Rotterdam has developed from a triangle on a turbulent estuary (the classic Dutch city form) into a rectangle with the tamed river as the centre line. The archetype for this symmetrical position is not to be found in the Netherlands but rather in Iraq; the antique Babylon of 4000 years ago.
-DB / DaF-architects