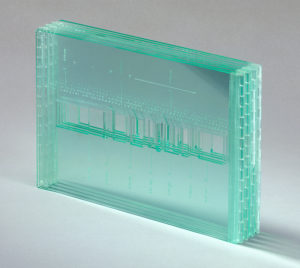 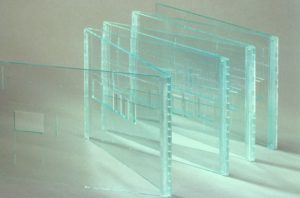 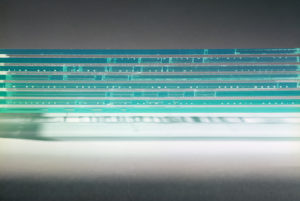 In ‘Flatland’ (1884), Edwin Abbott’s book about the ‘higher dimensional’, he describes the inhabitants as two-dimensional figures, who can only perceive each other as straight lines. There is a strict hierarchy among the inhabitants of Flatland; the lowest being is a needle (the woman, the worker), the highest a perfect circle (the priest). A woman is perceived as a point and can thus be sharp and deadly…Via these cross-sections from a lower dimension, Abbott challenges his readers not only to understand the mathematical principles of the higher dimensions, but also to see through the social hierarchy of Victorian Britain.

The 3D book simulates the ‘Flatland condition’ by means of pages of cross-sections, which translate a four-dimensional form into two-dimensional cross-sections. In this way, the book forms the track of a cube that tumbles through time and space. The shadows and reflections, which come into being with the help of these pages, give rise to a succession of (multiple) interpretations. Only when they are completely unfolded do they reveal their literal meaning.

Realization: the simulation of the higher dimension can be studied with the help of computers. The direct translation of the digital image into a laser cutter adds the necessary precision and duality to the interpretation.
-WD