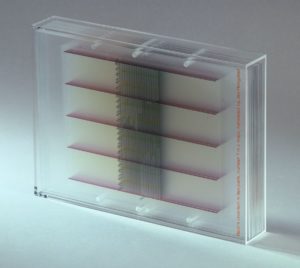 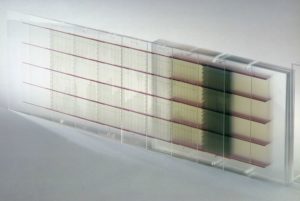 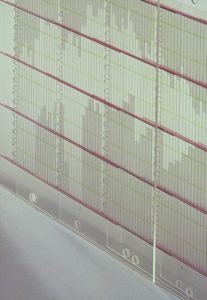 Sound has by nature the potential to determine distances in space, while the blind are able to recognize spatial forms with their sense of hearing. The essence of architecture is to define space.

Jan Hoogstad’s spatial manuscript is the result of his earlier experiments in the field of ‘music architecture’; an architectural theory he himself formulated, which is based on spatial systems according to the musicological model. Leon Battista Alberti (c.1450) asked himself whether heard and seen relationships ‘listen’ to the same law. A quotation from his ‘Ten books on architecture’:
‘…He adduces Pythagoras’ testimony for the statement that the numbers by means of which the agreement of sounds affects our ears with delight, are the very same which please our eyes and our mind.’ Intrigued by this, Jan Hoogstad has produced a visual translation of ‘J.S. Bach’s invention no. one in C major’, first as a drawing and maquette and then as a spatial manuscript. The intervals are graphically plotted in relation to the keynote. This representation gives a good insight into how the composition fits together like a sort of jigsaw puzzle. The vibration numbers (tones) have been translated into surfaces. Each tone is translated into a surface and is given its own position. Empty spaces come into being in between. Do hearing and seeing produce the same aesthetic experience? ‘I have reinterpreted J.S. Bach’s two-part invention in C major as a sound image. Every composer or interpreter of music is familiar with the experience whereby such a sound image instantaneously appears, as a virtually timeless continuum, in the imagination. While playing, this “image” is then spun out linearly. I have endeavoured here perceptibly to encapsulate that “sound image”, with the speed of light.’
-JH