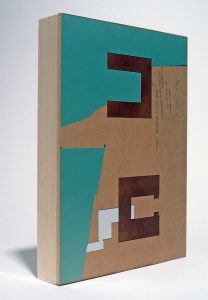 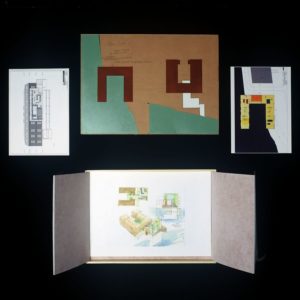 0086
16-06-1997
TWO U’S FOR AMSTERDAM
Steven Holl
Architect
Collection: The written versus the constructed

‘Steven Holl (b. Bremerton, Washington, 1947) keeps both sketchbooks and journals as part of the design process. For more than a decade, he has drawn and painted in spiral bound commercially produced watercolour sketchbooks with thick paper (12.7 x 18 cm).

Holl likes to work in his sketchbooks each morning in order to “excercise the subjective side.” Sometimes he records images from dreams or paints abstract and semi-abstract compositions. At other times he makes studies related to specific projects. (…)
Holl’s drawing style is exemplary of his interest in the phenomenological experience of architecture.

Futurist, Metaphysical, and Neo Suprematist compositions provide formal frames of reference for his conceptions. Like his buildings and urban schemes, his drawings – as drawings – seek to evoke a heightened awareness of perception. Many of his abstract watercolours are meditations on forms with dissolving edges, in which drawn lines and pooled colours create dramatic spatial tensions and chromatic effects(…).’ (Carol M. Reese, The Architect’s Sketchbook)

Steven’s concept for the box is that it should be in wood with two compartments inside, one for each of the projects that the office has made for the city of Amsterdam. He calls this idea ‘Two U’s for Amsterdam’. The lid is to be inset with representations of the two projects in red latex rubber, slightly raised above the surface of the wood so that one can feel the material.