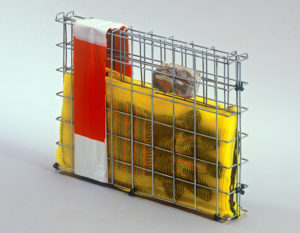 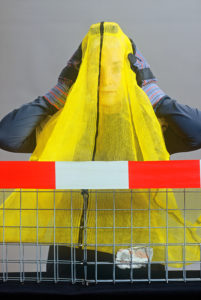 THE WALL, a sound separator. Space approached in terms of sound.
Interior sounds are located in exterior sounds. They exist by virtue of the built environment. As a result of, for example, demolition, that which has been realized through architecture, through construction, and therefore has its own sound world, disappears. In the demolition phase, the interior sounds intermingle with sounds from outside until the moment when the walls have been knocked down and the sound has faded away. Interior sound has merged with exterior sound. Transitional areas are a recurring theme in my sound walks. This spatial document represents the demolition site at the moment when the building’s remaining walls are still standing. The red and white cordon tape separates the public from the demolition site. The danger zone is further screened off by fencing. The construction netting also protects the public from that which once formed the sound separator: the rubble of walls and roofs. Behind the netting are the demolition workers, who are in the process of obliterating what was inside and sounded like inside.
Those who listen become part of the wall’s final minute as a sound separator. Physically, you are still standing inside, but you are listening to the sounds of the demolition hammer, which is knocking down the wall from the outside. The demolition worker asks you to step outside.
The sound is real time and unmixed. The materials used are taken from reality.
-CE