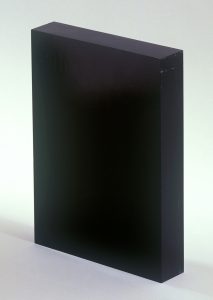 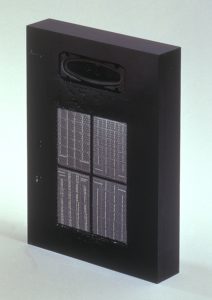 ‘The phenomenological transformer’ transforms light waves into sound waves. While most of my manuscript is black and thus in effect invisible, the solar cells and (to a lesser extent) the loudspeaker are by contrast clearly visible. Three different frequencies of sound waves can be elicited from the black box, namely a sinus tone of 70, a sinus tone of 320 and a sinus tone of 440 vibrations per second, but never more than one at the same time. The smallest measurement of the Vedute manuscript, 70 mm, thus produces the lowest vibration number and yet the longest wavelength; just as, conversely, the largest measurement, 440 mm, produces the shortest wavelength and the highest vibration number. (Interestingly enough perhaps, 440 vibrations is also A, the starting note in Western classical music. Orchestras, for example, tune to A.)
‘The phenomenological transformer’ can only transcribe the Vedute dimensions in sound if the inputs and outputs (solar cells/ loudspeaker) are visible. If they can no longer be seen, and, as already stated, the surrounding black is not visible either, no transcription is possible. I would venture that in this situation the manuscript no longer exists.
-MV